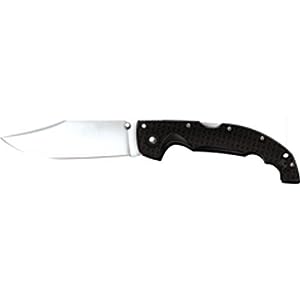 Personally I have always kind of stayed away from Cold Steel. Mainly because I can’t say I am a big fan of their CEO. But I have always been told that they make some pretty great stuff. So after a few of our all day seminars. I was pretty easily convinced to pick up Cold Steel Voyager XL.  You can find them for around $50 bucks or so online, and even some Wal-marts are said to be carrying the Voyagers now.

They come in about 3 sizes. So being in Texas, one of the few states with a 5 1/2 inch legal blades, I picked up the XL. This is also the newer type of Cold Steel Voyager which has a more aggressive handle and a different, not as ‘pretty’ blade as the older version. Some people prefer the older more slimmer version as well.

Thats not a knife…now this here, this is a knife

So first off, the Cold Steel Voyager XL is pretty big, about a foot long with the blade out. It also has a bit of heft to it without being heavy. It has a great feel to it overall. It is almost to big to use for small knife tasks (unless you want to make a scene). I almost feel the need to look around to make sure no one is around before I pull this huge knife out to do anything with. So its a pretty big contrast to smaller 3 1/2 blades that no one really looks twice at. So for me at least its usage will be pretty much for defensive purposes, so i still carry a smaller knife for more day to day usage, but like they say anyways two is one, one is none when it comes to knives.

Second thing people notice about Cold Steel Voyager is the grip pattern is pretty aggressive and can easily irritate the skin. Some people don’t like it and i have even heard of people sanding and smoothing it out. I am even thinking of dremeling in a checkered pattern along the back spine for easier draws at some point because i think that area is to smooth.

Once again Cold Steel Voyager a pretty big knife and takes up quite a bit of pocket real estate making it a bit of a hassle if you wish to have other reachable objects in that same pocket. So what i have done is designated that pocket for some EDC (every day carry) objects that i rarely use, items like my flashlight and so on, which cleared up some space in other places. Some people have said that the grip can wear down your pants pretty fast, so i will see soon i guess.

I find it really easy to access and pull the Cold Steel Voyager from my pocket, the aggressiveness of the grip, and the two finger notches on the rear gives a very positive feel. So I know when I have the grip where i want it, and obvious when i don’t.  Opening with a wrist flick can be a bit tricky, but it gets easier the more you practice. It takes a bit more momentum and space to get the Cold Steel Voyager open then i would like from a accessing perspective. I know some guys who can open it in a very small space. So with some more practice and wear i think ill be able to do that eventually.

When opening like that it does have a very ‘distinct’ feel due to its mass along with a very satisfying click, but it is very easy to not put enough umph in the opening. For good or bad, it does not seem to go to a half ( like a 90 degree) opening state, it either opens fully or it closes back up. If your ‘lucky’ when it closes due to a bad opening then you can keep your finger tips intact. I have, only once so far, when working on opening in a small area had it open wide enough to just come closing back on my finger. So be careful.

It uses the Cold Steel “Tri-lock” system which feels very sturdy. One problem i was worried about was how easily the thumb can reach the release, but it was unfounded because from any normal grip i could not get the leverage to open it accidentally.

When opened I find that i can get a great natural grip on the rear of the handle where the notches are, which makes sense why that is where they are located. This position at the rear gives you a few extra inches of distance which can make this long blade feel even longer. The curve of the rear handle fits nicely in the palm. For me it ends up with the thumb and the index, middle and ring on the rear of the grip which gives a very nice positive hold. Some people i know go back even farther to just having the thumb, index and middle giving a extra half a inch reach or so but i cant find a good reliable grip from there so i choose not to.

One thing though is to be careful when you close it, i don’t suggest you try and close it one handed. The weight of the blade is enough to swing it right into your fingers. Though it can be done if your hand is close enough to the axis its best to just take that extra second and use both hands.

Overall i am very happy with my purchase of the Cold Steel Voyager XL. Its a great defensive knife that allows for a long reach with a good hefty blade. Though it takes a bit more space to get it open then i would like that should be fixed over time with practice. It is very easy to see why so many people choose this knife especially for defensive carry, and for its price it is very hard to beat. Only having it for about a month or so now i can say it is the best knife i have owned and i will probably pick up another one soon.