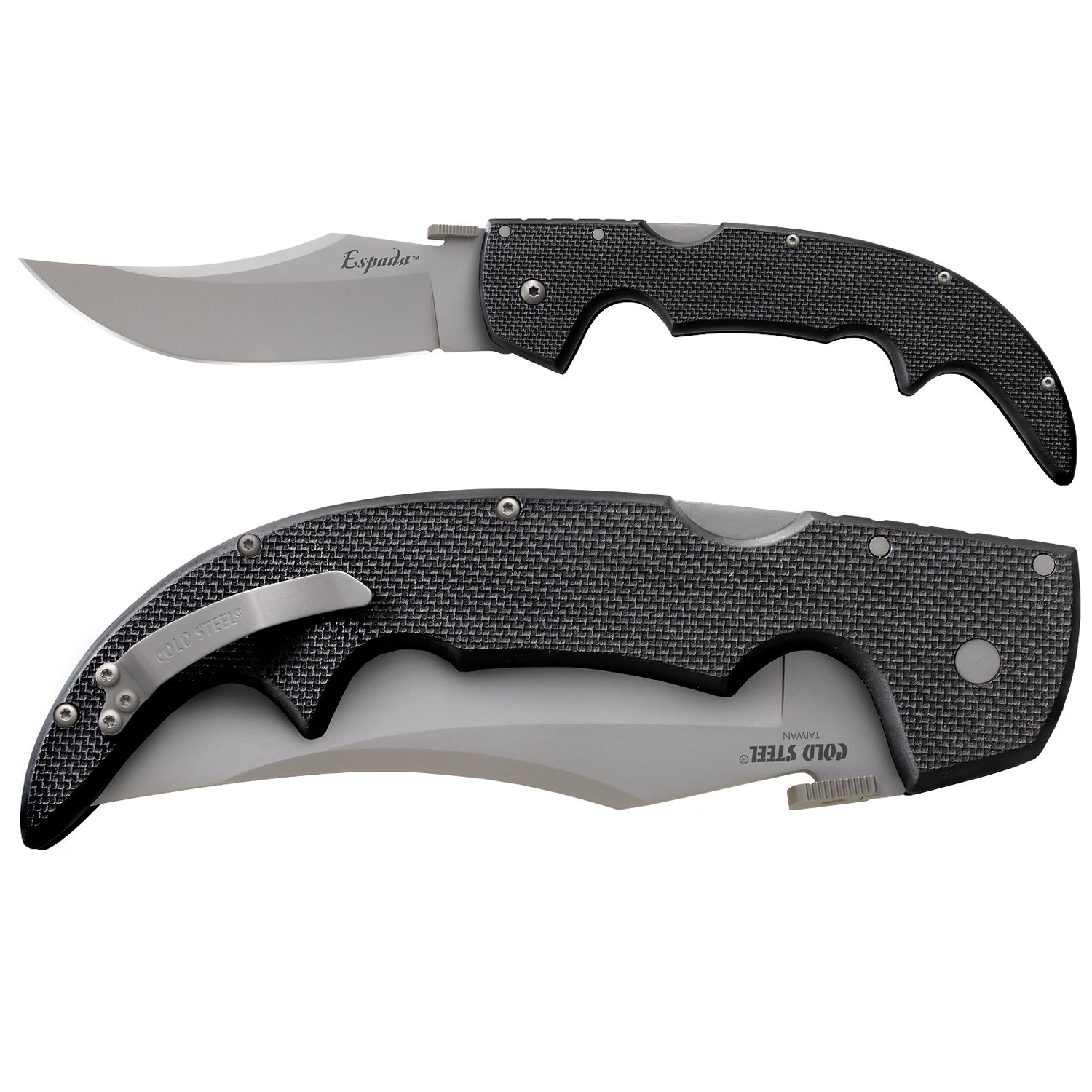 Along with the Voyager, the Cold Steel Espada is a very common blade to see at our knife seminars. There are two major types, each in 3 sizes. You have the cheaper G10 handle and the more expensive (about 2x more) polished ones. The polished Cold Steel Espadas are very pretty with a nice shiny blade. While the cheaper ones (as shown) has a more grayish blade and G10 handle. Other than some looks and price they are pretty similar.

Cold Steel Espada come in 3 main sizes, Medium, Large and Extra Large. The medium does not have the “wave” feature on its blade while the other two do. The XL is just gigantic and its why it earns its name “Espada (sword)”. I went with the large because its legal in most of Texas (boo San Antonio). It has a very similar feel to my Voyager so handing it was very simple and enjoyable. You can tell just buy looking at it that its more expensive than the Voyager. I manly bought it for its pocket wave feature on the blade which the Voyager does not have.

As with all Cold Steel knifes the Espada shown up very sharp. It does have a different ‘finish’ to the blade then the Voyager does. Unlike the voyager which i could just sweat on all day the Espada started showing some surface rust at the end of a pretty exhausting training day outside. A look online shows that this is rather common with the Cold Steel Espada. I sanded it off and will now have to keep a extra eye on it while making sure i keep it clean with anti-rust pads. That’s pretty much the only negative i have to say about the knife.

Like i said the main reason i ‘upgraded’ was for the Pocket Wave feature and with it, it accesses and deploys like a dream. The wave catches on the edge of my pocket and opens nice and easy with a good strong sound. I don’t even think i could deploy a fixed blade any faster. With a wave type lock you usually have to compromise your grip on the handle but with the finger grove near the end i still felt like i had a secure grip. Like with the Voyager it has the axle lock locking system. This system give a very strong almost fixed blade feel. I have no worries of it ever coming lose. You do need to push a bit hard to release it but that feels like a good thing. Without using the ‘wave’ it opens just like my voyager did, so it feels like a worthy upgrade.

For $100 bucks its not exactly cheap (the Voyager was only $50) but to me that wave function is well worth that extra $50. I’m now gonna start dropping hints to my wife and try and get the polished ($200) for Christmas

– Blade gets surface rust easily  if your not careful
– Kinda expensive