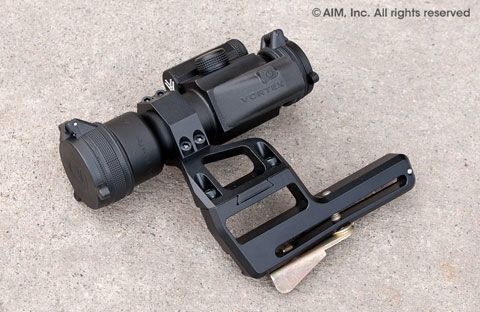 As optics improved, and scopes became more common for infantry men, the side rail was being used for more than just night vision.  The placement of this side rail leads to a common issue in Russian style optic mounts for the AK where the optic was commonly off center of the bore. This of course made a consistent cheek wield difficult, along with the increased difficulty of having your scope not only higher, but off to the side of the bore.

As time went on, newer designs and more choices to the mounting options have come out. A common goal for a lot of these mounts was to have the optic end up being right over bore while still using the side rail. But with so many types of AKs, so many different builders, and with so many different tolerances, it was not uncommon to end up having the optic be a bit off center anyways. So this lead me to the RS Regulate RS AKM mount for my AK SGL-21.

The RS Regulate RS AKM mount allows you to adjust the scope’s position to get it right where you want it. This RS AKM mount is designed to be ‘custom fitted’ to your rifle. Once you place it on the side rail, you then take out a retaining pin, and screw the brass lever (why is it brass? Its the only non black item on the rifle),  and it squeezes two metal bars and that’s how it locks in.  Once it is fitted to your rifle you can easily remove it and reattach it and it will hold its zero.  I found this claim to hold true through out all of my testing. Once set the mount was easily and quickly removable and re-attachable.

I did try and attach the RS AKM Mount to another AK rifle and noticed that the fit was not as snug or as secure as it was on the original rifle. This means that once bought and set to a particular rifle it may not work quite right with any other. This could hurt its resale value. I wanted to mate this mount to a VORTEX Strikefire so I bought the mount with a 30mm scope ring. You can also buy this mount with different items if a scope ring is not what you are needing.

I found the build quality of this RS AKM mount to be very robust. On the main mount there is a dovetail and two set screws that allows you to adjust the position of the optic to be right over the center of the rifle. It was pretty easy and straight forward to do some fine tuning both at home by bore sighting and once i got the AR AKM mount to the range. Once you put it where you want it, you tighten the screws (maybe with a bit of locktite) and you are good to go. With this mount of a Strikefire i had no issue taking off the top cover without needing to remove the mount and optic.

EDIT: RS Regulate has released a new version of this RS AKM Mounting system. It is a little bit more expensive, but easier to modify, a little lighter and more flat. It is also now sold as two parts, the side rail mount, and the upper to match whatever optic you are using. Both can be purchased from Brownells. The two you will need for this build is now the RS AK-301 Lower Modular Mount and the RS AKML Aimpoint Upper Mount.

When I purchased this optic, it was part of a special deal from AIM Surplus for both the RS AKM Mount and a VORTEX Strikefire. So I next I will be discussing the Strikefire optic.

Now that i have a siderail mount for my optic, I needed a optic. Well, actually i picked the optic first and then found a mount for it. There are two main versions of the Vortex Strikefire, a red and green version and one that is just red. Either version is 4 MOA with no magnification. Though it does include a 2x extension you can screw on. I went with the just red dot not only because it is said to be brighter, but it was also said that you held the power button down for 5 seconds to turn on instead of instantly like the red green one does. This is not true, it comes on instantly and you have to hold it down to turn it off. I wish it was the other way around.

Other than the to easy on, switch the buttons are pretty obvious in their usage. It went on easy enough onto the mount and it does not seem to be loose fitting like some others online have said. If the Vortex Strikefire does start coming loose (to where you can twist it) adding some electrical or rubber tape will fix that problem pretty easy. The lens protector caps that pop up are pretty hard to put on but nothing all to bad, and they pop off quick and easy. A down side is iron sights are in the way of the front cover so you can either force it over it or first pop up the sight.

Once mounted I quickly bore sighted the Vortex Strikefire in to where the sights where currently located at. I figured this would get me on paper at least. Since you can co-witness with this mount and red dot, I set it up in such a way where I could use all three at the same time. One could use just the front sight co-witnessed with the dot, you can use the dot itself, you can just use the iron sights, or any mix that you like.

I brought it to the square range to try it out, I first set it up on the 25 yards range and with the dot it on the Vortex Strikefire went practically in the same hole as when using irons. No matter how I shot it, iron, just the dot, dot and front post, dot and back post it went in about the same spot every time, so no complainants there. With the 4 MOA the farther out you went the more of the target the dot takes up, and the 2x extension tube does not make anything much better. The Vortex Strikefire optic was designed to be used in close ranges. I have used it in a few Carbine matches with zero issues.

Few months later I finally got to take it through its paces through two two-day courses with Sonny Puzikas, one outside in the Texas desert and another in the Texas rain. Ran it through its paces with really no complaints. It worked well and did everything I needed to do. Well I take that back, the screws used on the mount shows rust, they are also recessed and hard to get to. The screws rusting this quickly is a bit disconcerting I must admit. For open field work I found the red dot quick to pick up and i had no worries about getting it dented or dirty. Its a tough optic.

RS AKM Mount
– Screws started having surface rust almost instantly
– It is not cheap, and its upgraded version is even more expensive.

VORTEX StrikeFire
– Too easy to turn on accidentally

For a nice reasonably priced mount and red dot you could do much worse than this system.

I have had this system for about two years now so I figured it is time for a update. So far I have found myself to be running my rifle a lot more with just plain iron sights with no optic than I do with the Vortex Strikefire attached. I have ran it though many rifle courses, NRA matches, and more. Unlike with a handgun the optics are not giving me that much more of a advantage than running plain irons under a certain distance. Sometimes it even puts me at a disadvantage when I lose the dot during and catch myself stopping to look for it. None of that is really the optics problem. I have not had any trouble with the RS mount or the optic, both have ran great. I will most likely replace the optic with something for more long range use.  Knowing now how I like to run my AK I would not have picked any optic for it, but I am glad that i have it as a option.